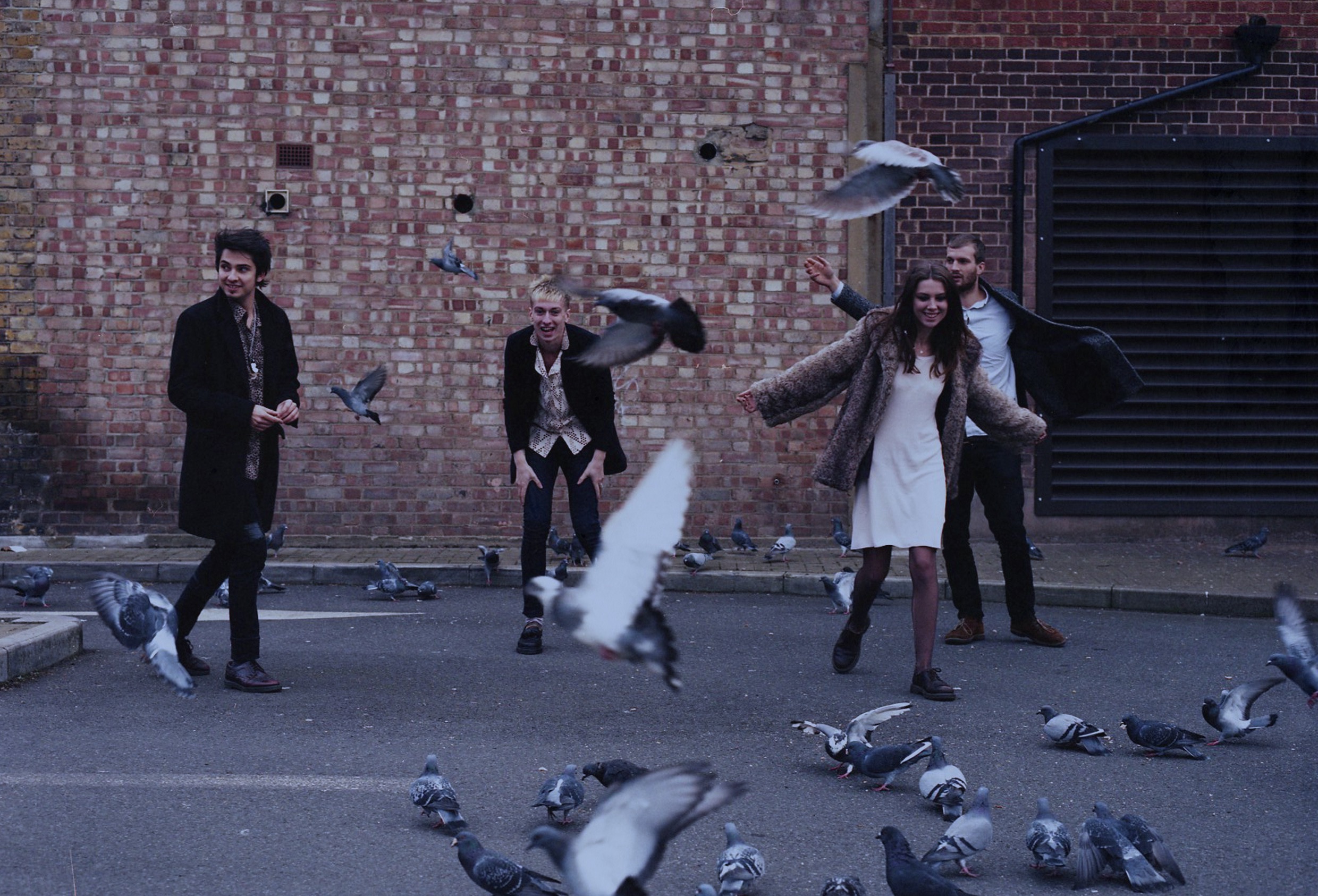 London’s Wolf Alice were one of the most hotly tipped bands of 2014, and for good reason. Their EPs Creature Songs and Blush sparked international acclaim, seeing the band take stage at Glastonbury, Reading, Leeds and SXSW and their own headline UK tour, all before releasing an album. 2015 looks set to be even bigger for the quartet, with a US headline tour as well as European tour in support of Alt-J kicking off this month. Wolf Alice’s Ellie Rowsell took some time out for a chat after the band played to huge Australian crowds at Falls and Southbound.

How’s your day been?
Yeah, great! We’ve been walking around being proper tourists and now we’re just having a drink and it’s sunny and everything’s great! I’m in a very holiday mood.

So you’ve had a bit of time to hang out and see some stuff while you’ve been here?
Yeah a little bit. We went to the beach on the Gold Coast a few days ago, that was amazing. When we were in Hobart a few days ago, we went to MONA to see the art gallery, went on the ferry. So yeah, we’ve had bits of time off, yeah.

You guys just played Falls and Southbound, how did you find the shows?
Yeah really good! It’s our first time in Australia, so I think we expecting no one to turn up because it was a pretty early slot but there were a lot of people there and people were singing along. Everyone here is very nice and very charming, it really exceeded our expectations, it’s been really great.

You guys have had a huge year playing festivals like Glastonbury, Reading, Leeds… what’s it been like playing to such huge crowds at such big festivals.
It’s pretty crazy. We don’t have an album yet so to be invited to play at these festivals and have people turn up is crazy. We just feel really grateful that people are into it, which is what we’ve always hoped for.

You guys have a European tour with Alt-J coming up soon, as well as some US dates, is there anywhere you’re really looking forward to heading?
Definitely, yeah. I think America will be a big stepping stone for us. We played SXSW last year but to play our own show is really cool. It’ll be the first time I’ve been to New York and LA. I’ve been waiting for this moment for a long time and even to just go there is a real privilege.

You guys just recorded your debut album, right? How have you found the process of it coming together compared to your EPs?
That was the longest time we’ve had in the studio. Normally we have one day for one song, this time we had six weeks for fourteen, which is actually not that long but for us it was very long. We weren’t rushing, we were going at a good pace. We sort of learned from our mistakes, if something wasn’t working, just fuck it off, just leave it. It was good, it was a smooth experience. Well, for Wolf Alice who are often very clumsy in the studio.

Do you guys have a rough release date in mind yet?
I think it will be somewhere around May but nothing is set in stone at the moment.

Your Blush and Creature Songs EPs gained you so much praise and attention internationally, which is obviously a really positive position to be in but did you feel any pressure going into the studio to record?
I think I felt pressure from myself. I’ve waited for so long to do this and I know other people have waited so long as well. I feel like people are going to be like, “this took so long, show us why it took so long.” From myself as well; if you just do something straight away you don’t set expectations of yourself but I’ve been waiting two years to do this so I felt very worried that it wouldn’t work. I feel happy though and we all worked as hard as we could and if anything goes wrong which I don’t think it did, then oh well, we’ll try again next time.

What did you listen to growing up?
I listened to a lot of pop. I grew up listening to the charts, nothing cool or left of field. When I was a bit older, I was introduced to stuff like The White Stripes, Kings of Leon, The Strokes, Yeah Yeah Yeahs – mostly just from people like my friends’ big sisters and my dad sometimes. Then I got into garage music like The Pixies. Recently, I’ve gotten back into the charts so it’s all kind of come full circle. We all have different influences. Joff likes Bob Dylan and quieter stuff, Joel loves new metal and punk. We’re all kind of different.

Have you heard anything lately you’ve really liked?
Yeah, there’s this guy from America who’s pretty small everywhere else but his name’s Alex G, he writes kind of quiet kind of American High School grungey stuff. I’m totally in love with the new Iceage record Plowing Into the Field of Love

Yeah so good, hey.
Oh, it’s so good, yeah. I way prefer it to their other records. And there’s some cool stuff coming out of London like a band called Crows, Marika Hackman… lots of cool stuff.

What are you most excited about that’s coming up this year?
I’m most excited about releasing our album. I think if we left it any longer I’d get really frustrated and have a tantrum [laughs]. I just really want people to hear it and I want to hear it myself, I haven’t heard it yet. I just think it’ll really set us in stone, people who aren’t sure if they like us or not can make up their mind. We’ll feel like maybe we deserve a place… I don’t know. It’s the first step and we’ve been waiting to take that first step for a long time. I’m excited about that, it’s going to be one of the best feelings in the world.

Do you think you guys might return to Australia anytime soon?
No plans set in stone but if you guys will have us, we will gladly be back as quick as we can. We love it here, it’s been really good.