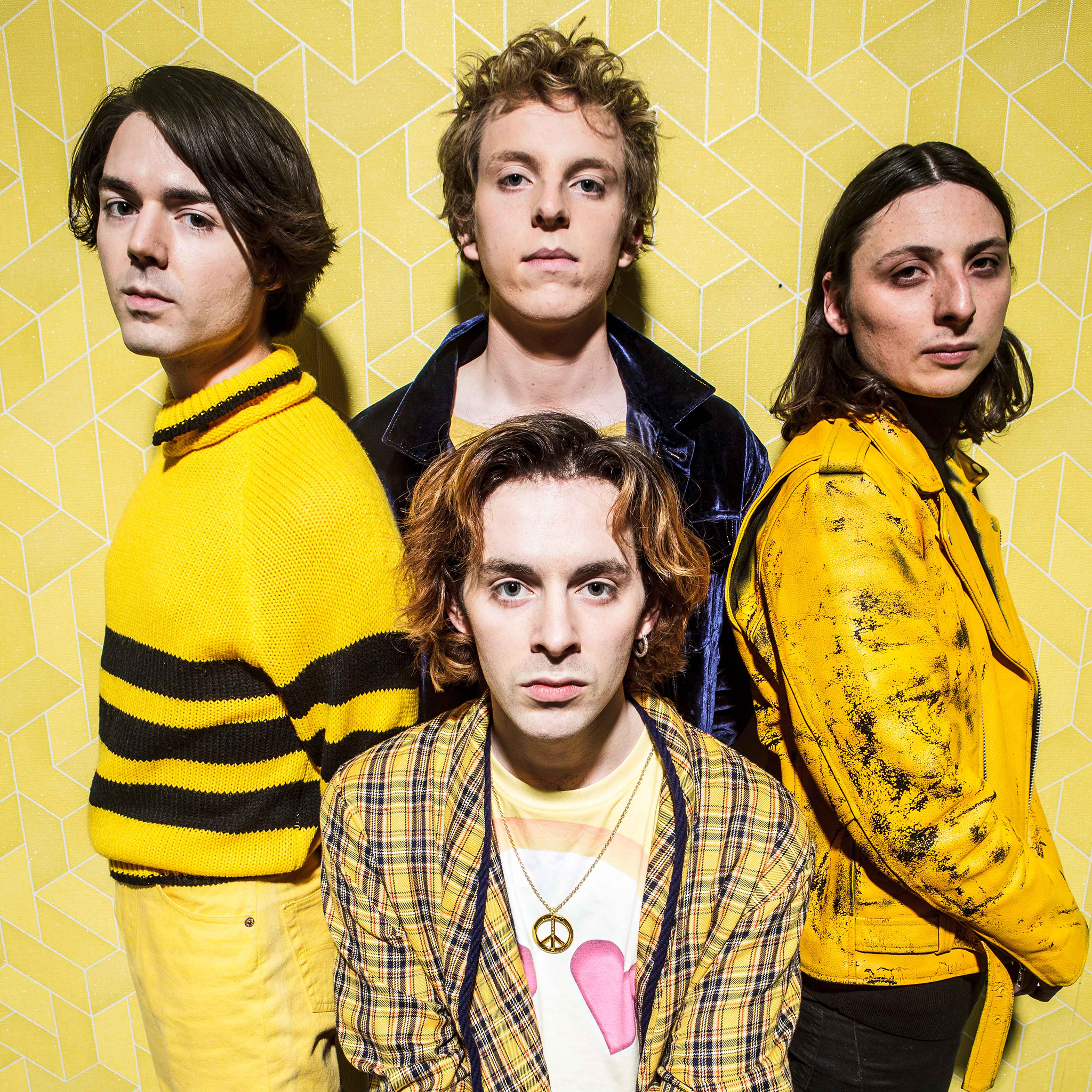 The release of their debut album In Love in 2013 saw UK quartet Peace explode onto the world stage, selling out shows at Shepherd’s Bush Empire and touring internationally, even visiting  Australia for a national tour. Having just released their second album album Happy People, Peace will soon be making their way back to Australia for Groovin’ The Moo Festival as well as a string of Australian sideshows. We caught up with charismatic frontman Harry Kossier to find out about more about how Happy People came to be.

The beginning of this interview was lost in recording – Audio version below.

(How did the process of Happy People coming together differ from In Love?)
… I was getting absolutely smashed every night of the week for about three years but I was just completely in my own world all the time. Kind of crawling around Birmingham trying to fall in love with anything that would move. That’s what the record ended up being about because I was writing songs and swanning about town in this absolute daydream genuinely thinking “This is going to last forever.” Then, I guess, for some reason which I don’t understand, we got signed to a major record label. Releasing a record about the previous five years and suddenly we’re touring and we have fans. When I realised people were really into us as a band it felt like the first time I’d ever had a responsibility. I can’t see people as a statistic. No matter how many hundred thousand followers you have or whatever,  every person is an actual person.Now I’ve got an actual responsibility to not be really shit, not fuck up.

So I guess I calmed down a little bit with the idea of indulging in selfish fun all the time. I’ve never been studious or good at school but I actually knuckled down when I was writing the second album. I wanted to write songs rather than just let songs come out of me – I was just vomiting songs in the first place. I sort of looked at the world more because I had time to because I was travelling a lot. I’d never travelled before so the bubble I was in was completely different to the actual real world. Then I was like, “Remember, gotta be honest. Can’t pretend to still be in the bubble.” I needed to write songs about what I was seeing. I felt genuinely concerned sometimes looking at the world, like “What are we doing to this world? This is mad”. All the songs started to come out. I had a really long relationship from when we first started touring to when we stopped touring the first record and that ended I was like, “oh my god, is that what it feels like to lose someone that you really didn’t want to. Then I started writing songs like “Someday” and it was a bit more soppy and I was like, “oh god, that’s completely not me.” But then I was like, “this is me because it is me. So what is me? What is life?” You know? There you go back to the old question. If that makes any sense, I don’t know if it does but I hope it does.

After your first record came out there was a lot of international attention on you guys, did it feel different going back into the studio to record a second album?
It felt kind of like the first day back at school, you know what I mean? After a summer of doing whatever, we went back to the studio and it was like, “Oh Jim’s there, hello Jim. Haven’t seen you since the last record.” And you’re getting out your guitar and all your pedals and it’s like when you go into school and you’ve got a new set of pencils and you put them on the table and you’re like, “Yes mate” and you write the date for the first time. It was kinda like that but instead of being school, you’re in a recording studio in central London and you can just do whatever you want. It’s kind of like if school was good. Like the opposite way you feel about going back to school but a similar vibe I guess.

You guys will be back in Australia in a couple of months for your second tour here – how did you find the last tour here? How were the audiences?
yeah last time was really good! Everyone had a massive one. To be fair actually I did a lot of writing when I was in Australia last time. I wrote loads of the songs which are on the record actually. Maybe I’ll write some more this time. I’m really excited to do Groovin’ The Moo and Charli XCX will be there – one of the coolest people ever. But yeah, doing more shows but I can’t wait really.

Is there anything you’d like to do this time that you didn’t get to last time?
I didn’t do anything touristy at all! To be fair I was writing so much last time I was there, I just kind of stayed in the hotels writing and doing demos and then played the shows. So I need to do everything. To be fair, there’s not anything in particular I want to do except for everything. My friend Noel Fielding, I was talking to him about Australia because we’re both touring Australia around the same time and he said when he was in Australia, he saw a spider so big that it used a pedestrian crossing. I was like, “I have to see that. I have to see these giant spiders.”

They’re not that big.
I don’t know, apparently they have like road safety ‘cause they’re so big. They know what’s going on. Gotta keep an eye out.

You guys are playing Reading and Leeds festivals again this year, what’s it like to play such massive stages?
Um, I’m trying to think of a way of putting it that’s not just “Well good”. It’s just well good. It’s like proper big stage, big crowd, everyone kind of knows all your tunes, everyone’s absolutely off their face. It’s one of those festivals where you let your phone run out of battery, you say, “right mum, I’m not going to text you for three days. If this is the last time, I love you”. You know, it’s one of those. Everyone’s going wild, its great. I’ve been to that festival so many times so I know how people are feeling and I know what they need to get from a band. It’s one of the good ones, it’s a good vibe that festival.

I’m interested in what kind of stuff you were listening to growing up?
I was well into The Who and Led Zeppelin when I was quite young. When I was 14 I went to live with my Nan for a bit and I lived right near my uncle and he would look after me sometimes when she was out. He was like, “Harry, listen to this” and he played me by Territorial Pissings by Nirvana and I was like, “Oh my fucking god”. I was like, “I’m so messed up” you know what I mean? Then I got really into Nirvana and I started writing a diary for about a week and a half and then I kind of snapped out of that when I was about 16 I guess. Then I started getting back into sixties and seventies music, The Beatles – I’d never really been into them when I was younger, I had Let It Be and that was it. Then, more Zeppelin, got quite into The Police. I discovered Bowie quite late when I was 18. Then I got really into techno because I hung out with these techno DJs in London who were really into the whole staying up for three days at a time thing. So I got into that which was really awful. Then kind of got into modern bands and stuff not that long ago. I was kind of not into modern music until I was in a band which is stupid. I wish I’d been into it all along because I would’ve known what I was doing.

You should, they’re good.
Ok I will. I’m going to listen to King Gizzard and the Lizard Wizard.

You guys have your biggest UK tour yet coming up this year, is there anywhere you really love playing in the UK that you’re keen to get back to?
I really love playing in Portsmouth. That’s a really a good scene, people are mad down there. I like way up north. I like Manchester as well. Just everywhere, the UK’s so small though – it’s a really good size though. Everywhere’s just brilliant.

Is there anywhere you would love to play that you haven’t before?
I’d love to do more of South America. Someone said that China was a good gig. I can’t say I’m a massive pop… I’m really debating doing it. China’s one I haven’t been to, that’d be cool.

What are you most excited about that’s coming up this year?
Um, going to Australia obviously? And doing Groovin The Moo and doing headline shows? Without a doubt.

Happy People is out now via Sony Music – Australian tour dates below.

WEDNESDAY 6 MAY THE ZOO, BRISBANE