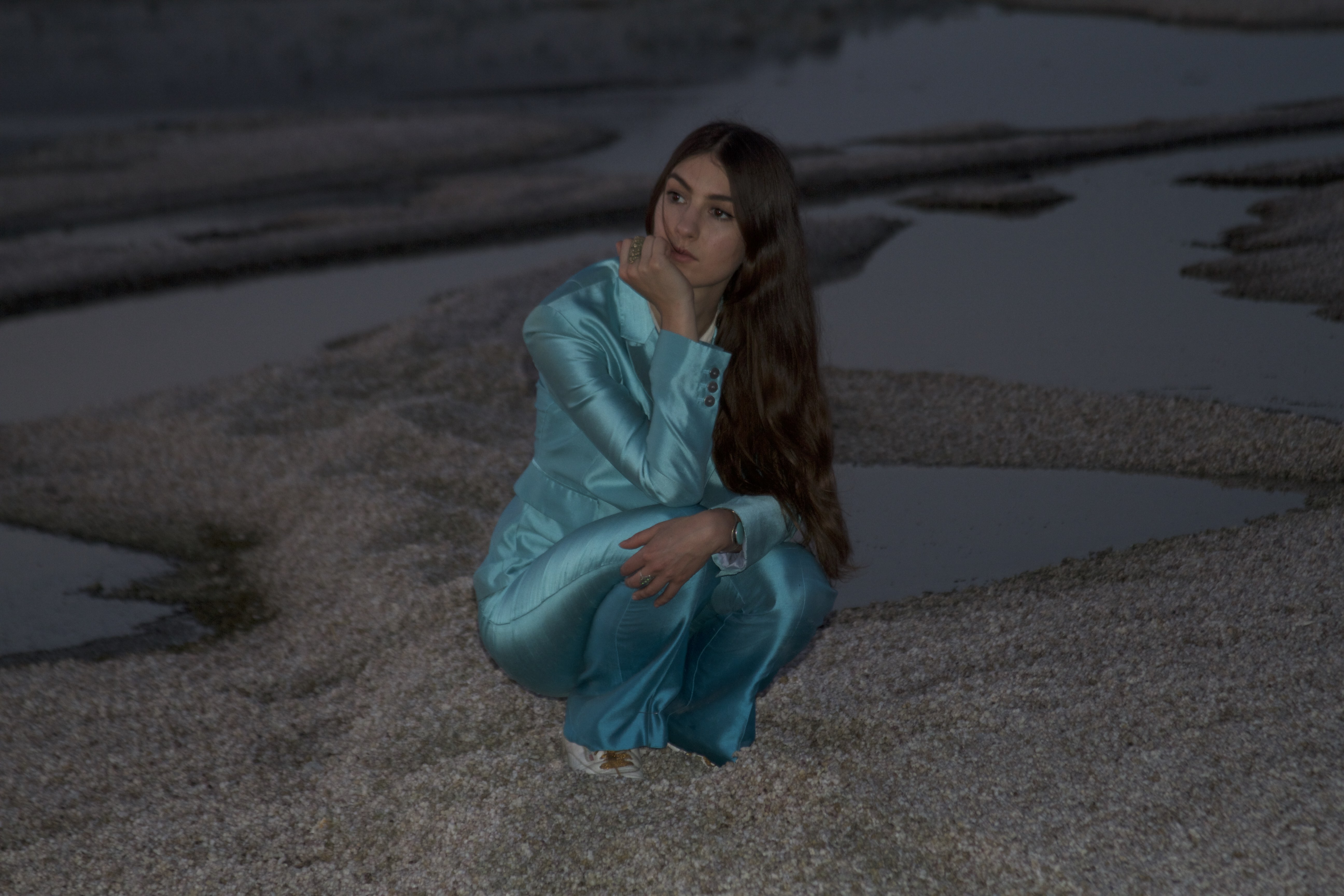 Singer, songwriter and producer Natalie Mering aka Weyes Blood first shared her modern take on American folk balladry with the release of debut album The Outside Room back in 2011. Following up the release with album The Innocents (2014), her Cardomom Times EP (2015), and Front Row Seat To Earth in October last year, Weyes Blood has proved to be one of the States’ most captivating artists. Active in underground music since 2006, Mering performed in noise rock bands before defining Weyes Blood unique sound, and has since collaborated with the likes of Jackie-O Motherfucker, Drugdealer and Ariel Pink, with whom she released new single ‘Tears of Fire’ just last week.  Natalie Mering took some time out to chat to us ahead of her Australian tour, kicking off this week.

You just got back from a huge European tour, how were the shows?

Yeah, I was on tour for like 40 days. They were fun, it was my favourite time I’ve ever been to Europe.

Were there any standout destinations?
Yeah, I really loved London, Paris, Glasgow and Lisbon, Portugal was probably the best show.

You moved back to LA from New York pretty recently, how have you found the transition? `
I’m from LA originally so it’s kind of like a homecoming. It’s been really wonderful moving back. I’ve been wanting to move back since I’ve been an adult, we moved to the east coast when I was 12 years old so I just wanted to reconcile some of the history that’s out here. A lot of my family is from here on both sides and my grandparents are from here which is a pretty rare case because California’s pretty young, you know.

You employed more electronic elements on this record, like electric organ and a lot of effects – how have you found the process of translating such a large, multi-layered soundscape to a live setting on this past tour?
It’s been really fun working out what different people are capable of doing at any given time. Each one of us is doing multiple things, multi-tasking and switching instruments and creating that world as large as the record with four people is a fun challenge.

What would be your ideal setting for a Weyes Blood show?
A cathedral. Which we had the pleasure of doing in New York recently which was really nice.

That would have been incredible. So I know you come from a noise rock background, what was your introduction to music like? What instrument were you first drawn to?
As a child, both of my parent’s played music around my house but I started playing piano when I was about six years old. I always sang at church and with my family.

What kind of music did you start out making?
Well, when I first started playing guitar, I was just writing guitar instrumentals and when I started playing piano I was just writing piano instrumentals. It took a while for me to have the guts to write words and sing on top of things but I was writing instrumental music before real songs. I started writing songs based on… I mean, at the time I really liked Sonic Youth and Ween and Fugazi and kind of weirder, more alternative bands. I got into flamenco guitar and started playing acoustic nylon string guitar and that’s where the beginning of Weyes Blood kind of started, when I was around 13.

You also made your own instrument as well, do you think that’s impacted the way you approach writing now?
Definitely, that instrument served me well and taught me how to create a different soundscape. The guitar has been used so many times but there’s just a lot of different ways to use strings, you know. I feel like that instrument – it was like a really long slide guitar, about six feet long with a bridge in the middle of it that you could move. You would play on the opposite side of the bridge so the pickup would only play the harmonics which are like… I don’t really know how to explain. Do you know much about harmonics?
Not really, no.
It’s like a very specific sound, it’s really interesting, you should look it up sometime, but yeah that and learning about the harmonic spectrum has always been a big thing with music for me.

“Working with tape, it’s so forgiving. It’s very rudimentary and spontaneous but once you start recording digitally, suddenly you need to know more about how to sculpt frequencies because you’re given this very digital sounding thing. There’s no forgiveness like tape.”

Did your interest in the production side of things come with learning to make music initially?
Definitely, I had a 4-track and I would do fun stuff with it at home and experiment and I really liked field recording. Studio recording, though, really learning the ins and outs and the technical lingo with recording – it took me a while to get into that. I had to get into digital recording before I could really figure that stuff out. Working with tape, it’s so forgiving. It’s very rudimentary and spontaneous but once you start recording digitally, suddenly you need to know more about how to sculpt frequencies because you’re given this very digital sounding thing. There’s no forgiveness like tape.

Do you think you’ll always work with tape?
Yeah, I like working with tape, I think it’s important to recognise that some things are better magnetic than digital. I do record things digitally as well, I kind of do a mishmash of both, it’s a Frankenstein.

What kind of stuff did you listen to growing up? What had an impact on you?
I really liked Jeff Buckley, which is kind of weird but I had a Jeff Buckley record when I was really young. My parents really liked Suzanne Vega and Joni Mitchell and Stevie Wonder and XTC – which was pretty random. I loved Nirvana and I would tape things off the radio onto cassette. I’m kind of just a grunge kid, I guess.

What have you been listening to lately?
I listen to a lot of classical music. I’m kind of addicted, in this weird way. I’m selective though, there’s a lot of classical music out there and some of it is exponentially better than other stuff. I love listening to Private Press Records and I like finding out about new, weird, outsider artists. I go on Youtube sometimes and follow the Youtube DJ hole, you know where you could just go on forever finding things.

The art that accompanies your music from the album art, to the videos and press shoots are so emotive and completely an extension of your music – how involved are you in the concepts behind the visual sides of things?
A lot. I kind of styled the album cover art, my friend Katie Miller took the picture but I picked the suit and location and had an idea of how it should look. She was really brilliant and did a great job. My friend Evan Howard Hill – I gave him a couple of ideas and he drew the font. I kind of steered the ship but Evan Howard Hill and Katie Miller were responsible for the end product.

How did you come across the location to shoot the cover? It’s so stunning.
It is really stunning. The Salton Sea, I don’t know if you know about it – it’s an abandoned resort town. It was a resort town in the 60s and 70s and there was this huge manmade lake there that was kind of like a sea and so much water evaporated that the water over-salinated and killed a lot of the fish living in it. So there was this mass die-off extinction and all the people moved and it became this desolate, abandoned wasteland of a national park. That smells terrible.

You’re heading back to Australia next month, this will be your first time right? Aside from the shows, do you have any touristy plans while youre here?
Yeah this will be my first. I would love to hold a koala. I saw my friend Alex from Mild High Club do it and I don’t know how he did it. He’d just played Laneway and he had this picture holding this koala and this has to happen.

In Brisbane, which I think is your last show, there’s a place called the Lone Pine Koala Sanctuary and that’s where most bands go and cuddle Koala’s while they’re in Australia so you should definitely hit that up.
Oh! OK, OK, OK. Awesome. Also, I have a lot of friends in Australia that I look forward to seeing where they’re from. It’s a long time coming, I’ve had a lot of Aussie friends for so long so I’m excited. 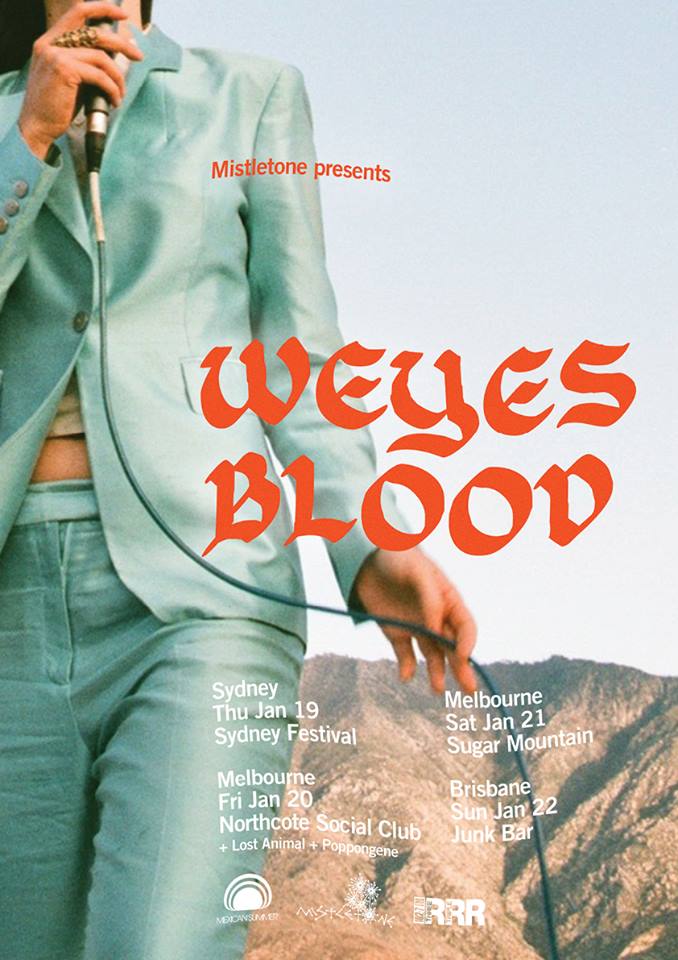