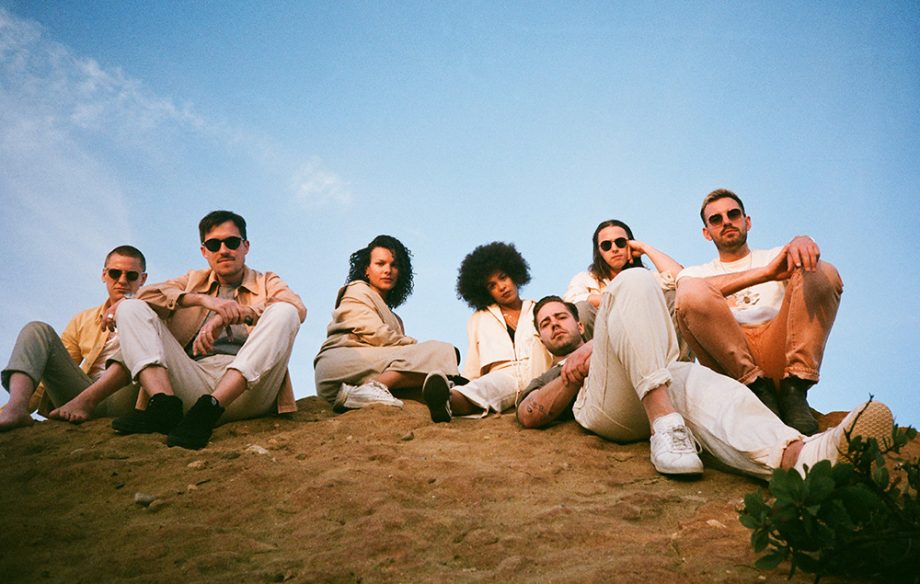 Last week, childhood friends Josh “J” Lloyd-Watson and Tom “T” McFarland, otherwise known as a production and multi-instrumentalist duo, Jungle released their second album, For Ever. The record follows their 2014 debut self-titled, self produced LP that saw them tour internationally to rave reviews and gain a reputation for creating the aspirational sound of young London. Whilst their debut was written and recorded by the pair in their own bedrooms, For Ever came to life through inter-continental collaboration, the help of producer Inflo and their expansion to a seven-piece live band. T was kind enough to take some time out to chat about the heartbreak, introspection and catharsis that shaped For Ever.

I’ve caught you while you’re at home which seems to be a rare thing. How’s your day been so far?
Yeah I’ve had three blissful nights in my own bed which is quite rare. I’m having a coffee and the cricket’s about to start which is all good. Then I’ve got to get packed up ready to leave again, we have 10 days away again from tomorrow onwards.

You have a huge run of international tour dates running into next year, how are you feeling about taking the new material on the road?
We’re really excited. We were lucky enough to take a lot of the new material on the road this year and the end of last year as well. We really wanted to have that experience of playing the new stuff live without it being released and guaging the really honest reactions from our audiences. The idea of going out now and playing the record when people know it is really exciting to us. We can’t wait to get out there and do it again.

How have you found that initial reaction so far?
It’s been really good and it’s given us a lot of confidence in releasing the record. We probably would have been a little more nervous and on edge about how it was going to go if we hadn’t had these great experiences live already. It’s given us a lot of confidence, a lot of energy and also, when you were playing last year and especially early this year in Australia, it gave us a lot of ideas of how to finish the record off. We were playing new songs live and then some of the guys from the band would be like, “on the record, have you thought about changing this a little bit? We feel as objective listeners that this could be shorter, or the intro could be shorter etcetera”. So, actually it definitely informed the finishing part of the record.

I can imagine it being a somewhat daunting experience, sharing the double A-side firstly, and the idea of sharing something new after these four years. How did you feel about putting something new out into the world?
I think the overriding emotion was excitement. This album was very much autobiographical and has helped us through some pretty difficult moments. Making this record has been very cathartic. We’re in a place now where we’re just so happy and relaxed and calm about everything in our lives. This record has really been a catalyst for those feelings and those emotions. We’re actually just super confident and super happy and this album for us has already done what it needed to from a personal perspective. It’s helped us get through some tough times, you know, break ups, we lost a friend in London in January. It’s the first time we’ve ever given ourselves the opportunity to make music to heal ourselves and to work through our problems and that’s been really beautiful to experience.

I interviewed you about 4 years ago just before your debut album came out and we spoke a bit about recording a lot of the album in your bedroom – what else was different this time around with ‘For Ever’ coming together?
We worked with another producer for the first time, I think it was really important for us to have someone come in and have some perspective on all the ideas that we had lying around because there were so many. We were working on between two hundred and three hundred ideas. We came to a point around 2017 where we felt we were kind of going sideways a little bit. We met Inflo around spring time 2017, he’d just finished working on Michael Kiwanuka’s Love and Hate, which is an album we really love so we were really excited to work with him. He came in and gave us some perspective and some guidance and some friendship and some love and really gave us the energy to finish off the record and had some great ideas like putting strings on the album was his idea and something that Josh and I would have naturally shied away from. We had preconceptions about how strings would sound on a record, would it sound too emotional, too like this or too like that? But actually, he really gave us the strength to let go of those preconceptions and just give it a go. The days we spent in the studio doing the strings were probably our most memorable moments of making the record.

As you touched on earlier, there seems to be a considerable amount of change in both of your lives since the success of first album and moving to another country – have these changes influenced your writing?
I think we just allowed ourselves to live our lives a little bit after coming off tour on that first album. The success was so unexpected, we didn’t really think we’d be playing to more that two or three hundred people on this first album. To end up at Glastonbury and Brixton Academy and going to do Laneway stuff in Australia was really incredible. We met loads of people and had amazing experiences and when we came back off tour around 2016, J moved to LA where his girlfriend was at the time, I was still in London living with my girlfriend and we worked remotely a little bit, I went out to LA a few times over the course of 2016/2017 and then it all sort of fell apart really. J’s girlfriend broke up with him, my girlfriend broke up with me, and I guess that really gave us the impetus to focus on working it all out and the only way we knew how to do that was by writing songs and finishing the album. It’s definitely a very cathartic record for us. It’s definitely been a journey and it’s been really exciting and a challenge as well to put that on paper and to try to find the musical and emotional vocabulary to express ourselves in a way that people would be able to understand and relate to.

Other than working remotely, did being separate from J effect the way you collaborated or was it the same just..over the internet..
I guess so, it’s hard to think back to those times and all that’s happened since then. But yeah, I would write melodies and chords and send them over and he would put beats on them and send them back so there was a little back and forth. I think we work best when we’re in the same country but you know, I wanted to give J the chance to go live his life and explore and ultimately those experiences have made this record what it is today. It might be frustrating at times when, well, obviously he’s my best buddy, we’ve spent pretty much every day of our lives together for the past 12 years so it was tough, a weird separation I guess but something that he needed to do and something I needed to accept and at the end of the day it made the album better as a result.

A huge point of difference for Jungle is your amazing music videos featuring these super talented people. It was really cool to see the multiple drops of the double A-sides and videos, are you still in the drivers seats when it comes to the concepts and direction behind them?
Oh, 100%. We’re just such perfectionists and control freaks anyway, literally everything that we do is by us, we do all our own artwork, our own posters. We created a production company while we were on a sort of hiatus ’cause we just love making music videos and have so many friends who have been so integral to our journey in terms of the visual sides of things. JFC Worldwide is our production company and we’ve been doing videos for young UK artists like Mined, Kojey Radical, and that’s just really great because it means that we’ve got total control and we love it. We’ve been on set about four times now and I really love getting involved in little things like getting everyone sandwiches and things like that. I’m basically head of catering. It feels right that we put so much effort and emotion into making the music that we do the same with the artwork and the videos.

Absolutely, that’s something that really translates as well. Is that world something that you’re interested in pursuing for a long time?
Yeah, I think for any chance for us to be creative together, that’s when we’re having our most fun. When we’re in a room or a studio together, shooting ideas and coming up with crazy concepts like, “wouldn’t it be cool if we built this big Jungle ralley car”, so we just did it. What we’ve really learned recently is that if you have an idea, just do it. It doesn’t even matter if it’s a good idea or a bad idea, people can judge that later on. It’s just the energy of having ideas and following them through is really special to us and it just creates a momentum. Once you’re in that creative place where you’re not setting yourself any limitations and not saying ‘no’ to any idea, no matter how big or small it is, that’s when you come up with the really nuts stuff that sticks.

Does that pursuit of creative outlets extend to you any other musical side projects or is the focus on Jungle?
We’ve done a few remixes lately, we did some work with a girl called NAO. We did some work on her first record. First and foremost, we understand that our focus has to be on Jungle and taking that as far as we can take it. Whatever comes after that is a bonus really.

JUNGLE FOR EVER AUSTRALIAN TOUR 2019