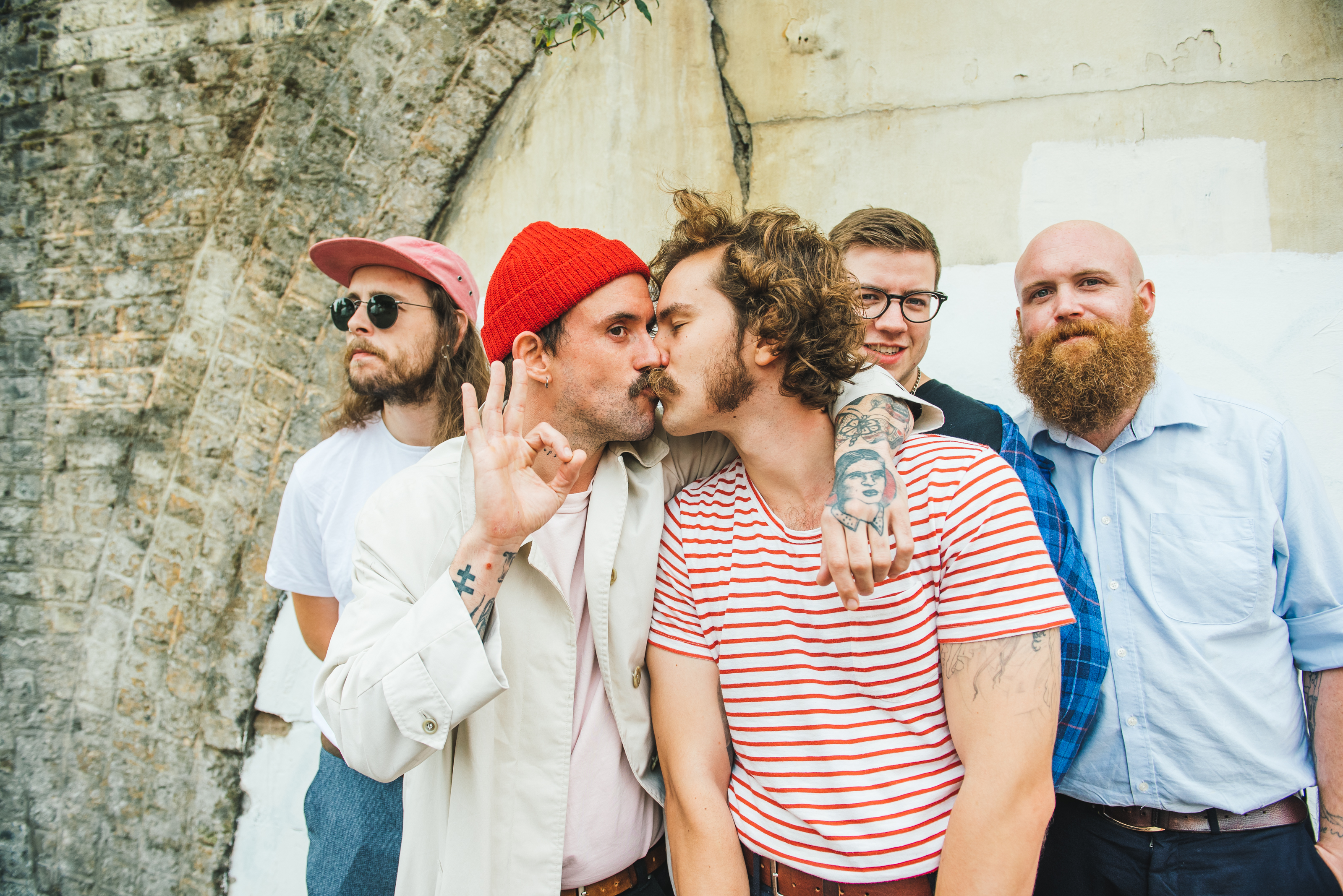 Bristol five-piece IDLES release their blistering second album, Joy as an Act of Resistance on August 31. The record follows their 2017 debut LP, Brutalism, that saw their fan base swell immensely and cemented their place as one of the UK’s most viscerally thrilling live acts with something to say. Taking on toxic masculinity, class inequality and nationalism with imperishable optimism, the album radiates themes of unity, pro-immigration, community and above all, love. A strong voice in a rapidly changing political and musical landscape, IDLES’ Joe Talbot (vox) was kind enough to take some time out to speak with me ahead of the album’s release.

– Audio version here and below –

Joy As An Act of Resistance is out this month, how are you feeling about sharing it with everyone?

It’s neither here nor there really. I’ve done it now, we have completed the album. It is no longer ours, it is yours. I’m done. We’re just focusing on getting the album right live and making sure we keep our end of the bargain and do it justice on stage.

Have you played a lot of its content live?

Yeah, there’s only about four songs we haven’t played live.

Brutalism was a hugely important album for a lot of people and saw your fan base grow massively. I know you sat with Brutalism for a while before you released it, this one feels more immediate in its release – is that fair to say?
Yes it is, yeah. We started touring straight away after the first album, we started it three years ago. We went down a misguided path and scrapped a lot of the songs we wrote back then. We got ourselves in a more concise and lucid position with a strong theme, as we do with all of our albums and we moved forwards. We got it done in about a year and a half and recorded it.

Did the way you approached putting this album together.. did it feel different this time around knowing that you had this existing fan base?
Yeah, we tried to ignore it at the start which is why we weren’t writing very well. We tried to ignore the pressures of second album syndrome, if you will. We tried to ignore it and just write as if we weren’t where we were and we tried ignoring it. We were allowing the pressures of our success to get the better of us. So, we turned around and we realised that by embracing the pressures and being mindful of our new position, we could enjoy ourselves again and use joy as an act of resistance. And we did. We learned to embrace the new platform we were on and our bigger audiences and utilize our position as a positive step forward. I think mindfulness and self-reflection is what we became much better at. We started enjoying writing again and we used that ethos obviously as the whole basis of the album. I’m very grateful for that.

In terms of recent events in the UK, the album is quite cathartic for the listener – is writing a way to process and to cope for you as well?
Yeah, of course. The ethos of our band is to hold honesty as the paramount tool to go forward. Honesty is a vehicle. We want to be as diegetic as possible so what I do with my lyrics is to try and be as honest and open as possible which is a freeing thing. What it does, is it allows us to be vulnerable to our audience. Obviously, I talk about politics a lot because it’s what we talk about a lot as a band, it’s what I think about a lot and what I talk to my partner about. With that in mind, it’s always going to come out in our songs. The one result I want from our songs is that I remind people of the most important element of politics which is the human individual and reminding people that politics is just the infrastructure of maintaining human welfare and safety and all that that encompasses. With that self-reflection, hopefully it will allow myself to feel more confident and love myself in order to be open to new ideas and new people, thus, the audience to do the same. The idea of opening up a safe place so that I can feel that I can express myself truly and not be lynched is a beautiful thing.

We’re living through a time where toxic masculinity and it’s grip on everyone is rapidly unravelling before us and it’s in art like yours that people have cornerstones to navigate this change. Do you feel pressure to provide the answers to people listening or more to provide commentary?
Yeah I don’t feel the pressure at all, I don’t think any artist should ever feel pressured in doing anything that isn’t true to themselves that they enjoy or that they feel they want to say themselves. I think as a person, as a father and a partner, I have a responsibility to learn to love myself. When you love yourself, you have a confidence in who you truly are and your flaws and your imperfections and you stop relying on the general consensus to perform as a man, or perform as a British person or perform as a woman, and you start to trust your own intuition and what you truly love and what you truly want to wear and what you want to say and how you want to dance or anything. Loving yourself is the key because then you don’t just go with what everyone tells you to go with, you have confidence in who you truly are in your own language. If I’m going to be as honest as possible, I need to really look inwardly and decide who I really want to be. And that isn’t a man, I never wanted to be a man, I just am a man – it’s just my genitalia, the rest is just performative. The more I just celebrate myself, the less I feel like I have to perform to someone else’s rules. I think it’s important to remind young people, children and adults to love themselves and thus maybe, if that language and that rhetoric grew, then more people would be openminded and confident in themselves and thus open to new ideas and new people and not lean towards fascistic right wing governments and so forth.

On that, you’ve built such a strong, positive community of fans. The band page added me to the All is Love AF Gang on Facebook and it’s a pretty spectacular community there. Do you feel the crowds at your live shows reflect that openness?
Absolutely, yeah. First and foremost, we didn’t build that group, they built themselves. As a band, it gives us something to feel safe in. They come to our shows and they allow us to be vulnerable on stage and they allow us to speak our own language which is a beautiful thing. Being in a place where you feel confident in your own skin, to be free and safe is a great thing and they give us that, we haven’t built that. It’s like a gift that we’ve been given that we din’t ask for and it’s amazing. We just hope that we can sustain that with our performance live and encourage other people to be vulnerable and feel safe at our shows. The AF gang is a marvellous creation that has helped us become better musicians.

Have you performed ‘June’ live?
No, no, no. I won’t perform ‘June’ live. Just because obviously the subject matter… My daughter’s death isn’t something I shy away from, I talk openly about it. It’s something my partner and my counsellor help me to come to terms with the notion of being able to be open and honest about it more than I was. I thought I was an open and honest person but it turns out I was being dishonest with myself and not honest with my emotions. As a musician and an artist ; which is a separate thing, I want to be able to perform to the best of my ability and as honestly as possible and I think there are certain things that I want to keep to myself, for now anyway. That will change, I’m sure ‘June’ will happen, but I don’t think I’ll be able to perform it to the best of my ability because it’s too painful and I probably won’t be able to get through the whole song. But maybe that’s as honest as it can be, maybe I should perform it and not be able to perform it. I want to do it when I’m comfortable, I know that I can, as in the audience will allow it… I just think it’s something I wrote for my daughter and my partner and for me that I want to keep for those people for now. I’m sure, in future, I’ll find the place to do it.

How involved in the visual accompaniments to your music? I know you’ve worked with some great up and coming creatives..
The artwork is all my direction, I don’t allow anyone else to make decisions on the art. Liam and myself made all of the videos before, except for some of the very early ones. I want to do as many videos as possible but often time restraints don’t allow it so the concept of the album being to feel confident in yourself by allowing yourself to be vulnerable within a community was something I wanted to instil in our art as well so we did a collaborative project with lots of artists and video makers. This album has been a lot more collaborative than I would usually go for and I probably won’t ever do it again. I have a hand and a say in all of it which I think, personally, it’s part of the whole thing. The artwork and the videos are all part of our music, it’s part of our art – it doesn’t stop at the songs, for me personally. I understand musicians who don’t have any involvement in their artwork and their videos because it they’re not interested, but I am. I always try and get involved in the artwork and the videos or I won’t feel like I’m enjoying our art fully.

I have to ask if there’s a chance you might visit Australia anytime soon?
We will. As soon as we can, we will.

Joy as an Act of Resistance is out Friday August 31 via Partisan Records and Pod / Inertia Music.