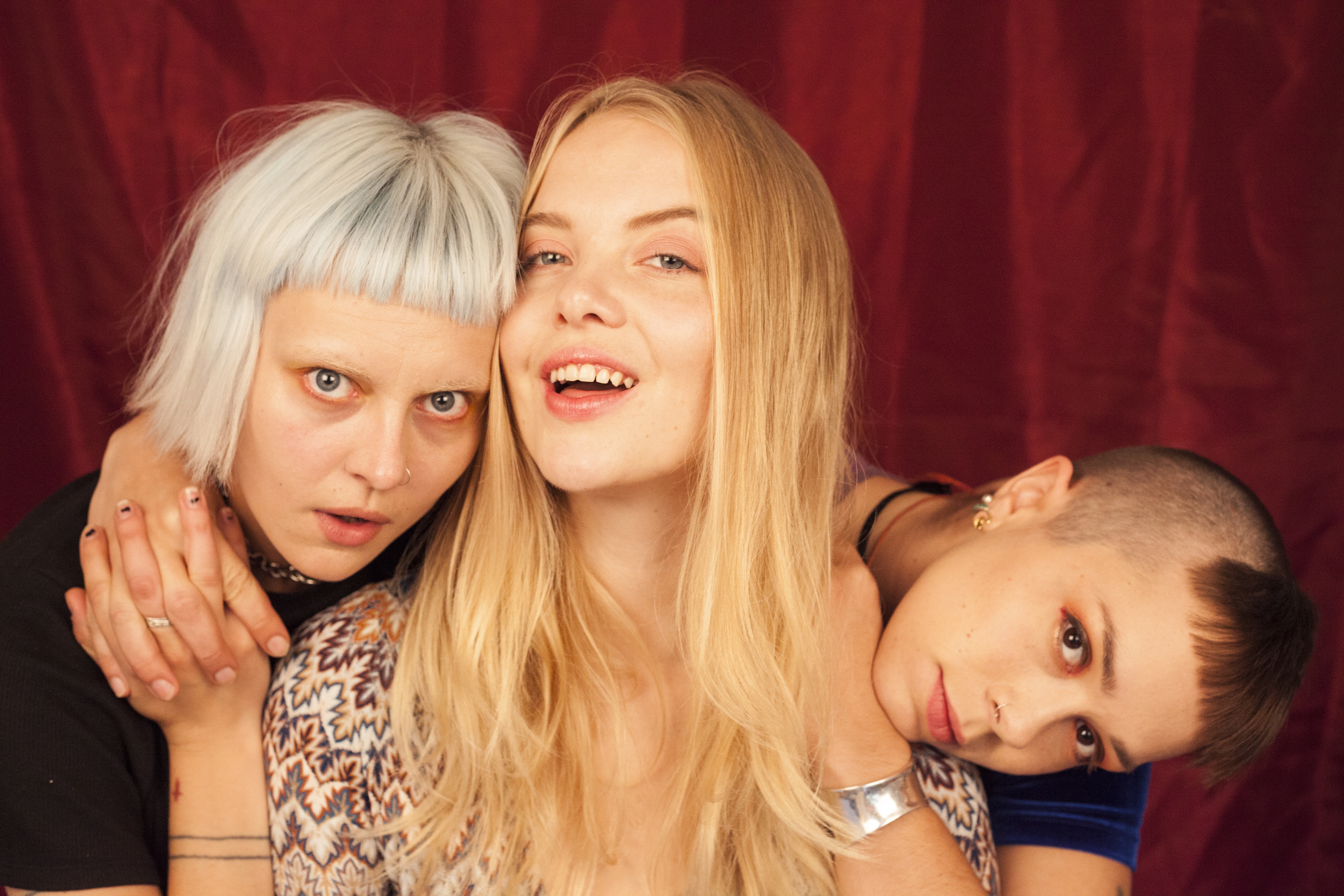 Last week, London trio Dream Wife released their incendiary self-titled debut record. Meeting at Brighton University, what began as an art project blossomed to a ferocious DIY touring outfit that has since garnered a reputation as one of the most viscerally thrilling bands to come out of the UK. Made up of lead vocalist Rakel Mjöll, guitarist Alice Go and bassist Bella Podpadec, Dream Wife’s debut is as joyous as it is angry, taking on themes of objectification, gender, autonomy and solidarity in simmering punk-garage-pop glory. I had a chat with Rakel Mjöll ahead of the release of their debut album about their upcoming Laneway tour, creating safe live spaces and their Bad Bitches Club.

Your debut album is out so soon, how are you feeling about the release?
I can’t wait. We’ve been working on it for a while. We started recording about a year ago so I’m really excited for people to hear these songs and to hear the album as a whole. It’s our debut album so it’s a pretty big step, a milestone for us.

You head to Australia shortly in February for Laneway – will this be your first time in this part of the world?
Yeah, first time. We’re lucky we’re playing so many shows, it’s quite far away that we’re playing seven shows – Laneway and then two headlines. I’m excited to go into summer, it’s so cold in London and I’ve been hugging my radiator for the past week and I can’t wait to wear a bikini.

Is there anything you’re keen to see or do while you’re here?
I just really want to stand in the sea for a while and be in the waves. That would be a dream. I’m from Iceland so it’s always not warm, so I’m very much looking forward to being in the sea.

How do you prepare for a massive tour like this? Have you picked up any habits along the way?
Yeah, snail masks. You know snail hydration masks? They’re cruelty free, they don’t harm the snails. They make them at spas from this juice made from their slime. When the snails are happy, and only then do they produce this slime. You just lie with them on for half an hour and then you’re ready for a show. It works wonders. Also me and Alice, we like to compete with each other about our vitamin stash. I’m always collecting things like Icelandic herbs from the mountains and cod liver oil, all those kinds of vitamins to keep us healthy because you have to be healthy if you’re travelling this much. So yeah, we compete with our vitamin collections and wear snail masks.

Dream Wife began touring the UK, Europe and Canada with four songs under the belt, no booking agents, management or anything – what did you learn in that period?
We didn’t know any better. I think that was a good way of doing it because we weren’t waiting for anyone else to help us out in that sense. We just enjoyed doing this and it felt fun and we basically went on these tours, went around Canada and Europe sleeping on coaches, not having a tour manager or even a drummer. We went on tour just because we wanted to. We didn’t want to wait for anyone to tell us, “Now is the time to go”. We probably should have recorded something first – we put on these DIY tours without even having released anything and nobody knowing who we were. So with that kind of aesthetic of just doing things has gotten us where we are today. We don’t take anything for granted because of that time. Once you’ve gone through the coach through Europe, you are so thankful to have a tour manager and to have your tour van. We’ve also been lucky because that we did that, we somehow avoided all the sharks in the music industry. Because we did things and didn’t ask for permission, we managed to curb the people that might not have had the best intentions for our band. We didn’t know what we wanted to do at first – we wanted to play and understand ourselves before someone else could understand it for us. Finding our own sound and working with the people that we wanted to work with, not people we felt we should work with has lead us to have a really wonderful team around us now. I think it’s important to keep that approach with you.

Creating safe spaces around your shows is really well considered on your part and you work with groups like Girls Against and have a girls to the front approach – is that something that is important to you from your experiences growing up attending shows?
We realised when we were touring a lot that our audiences were changing and that in fact there were a lot of young girls coming to show. It was amazing having these incredibly cool girls in the front singing your songs but we also felt a responsibility too. Through doing shows and speaking about this with each other, we realised there was a lot of stuff from our own childhoods that came up. We all had had really sketchy experiences at our first concerts that we went to, from around 12-14 years old – especially to rock shows. These were things that 13 year old girls going to their first shows should not experience. The idea that if you are touched at a gig, it’s just because you’re at a gig which is so surreal thinking about it now. Basically, there’s a huge responsibility that we feel that we don’t want people to be assaulted at our gigs in that way, and we don’t want it to be the norm.
I think it’s so good to work with groups like Girls Against, they come to the venue and put posters everywhere, they speak to the bar staff, the venue owners, the promoters, the bands playing and the bouncers especially – the bouncer has to be aware of how to tackle the situation. Throughout the set we talk about safe spaces, we talk about how it is important that everyone feels welcome. We bring girls to the front, the bad bitches to the front, and create this amazing female mosh pit. It’s so important to feel that you belong in a rock gig setting and that you shouldn’t expect something to happen that’s going to upset anybody, it’s just your place. When we walk off stage we want to know that people of all sexes in these incredible moshes have left that concert feeling great. Hopefully they had a great time and felt safe and that they could let go, scream, dance and have a wild time together.

Can you tell me about Bad Bitches Club? What it is and who embodies it?
That came from our friend Meg Lavender, she came on tour with us as a photographer. She’s a friend of ours from university, we studied art together in Brighton. She’s not a typical tour photographer. She does portraits and art photography. She came on tour with us and she ended up being much more interested in the crowds that were coming to the shows. She started taking portraits of people that she thought were interesting at shows and often it would be women that were coming to the shows. We would play the song ‘FUU’ and there’s a part in that song that says, ‘I spy with my little eye bad bitches’ which we repeat again and again as this sort of anthem for all the bad bitches in the crowd. Meg would take these incredible portraits of these girls and women and boys and men as well. If you embody this idea of what it is to you to be a bad bitch, then she would capture you.
It’s so great to have her out there before the show and taking these really empowering photographs when people come to the shows. We started putting them on Instagram and called it the Bad Bitch Club and it created a great interaction with people as well. We go to a show to a concert to be entertained and it becomes one big party that you’re having. There’s no kind of band hierarchy, it’s just one big mosh pit. The ethos behind Bad Bitches is that we’re all in this together, it doesn’t matter that we don’t know each other or might not have much in common. Right now, what we do have in common is that we’re Bad Bitches – we’re powerful and fun and we work together.

Dream Wife’s debut album is out now via Lucky Number/Inertia. Catch them at Laneway Festival and sideshows in February + Sydney and Melbourne headline shows – our ticket giveaway competition details are below.