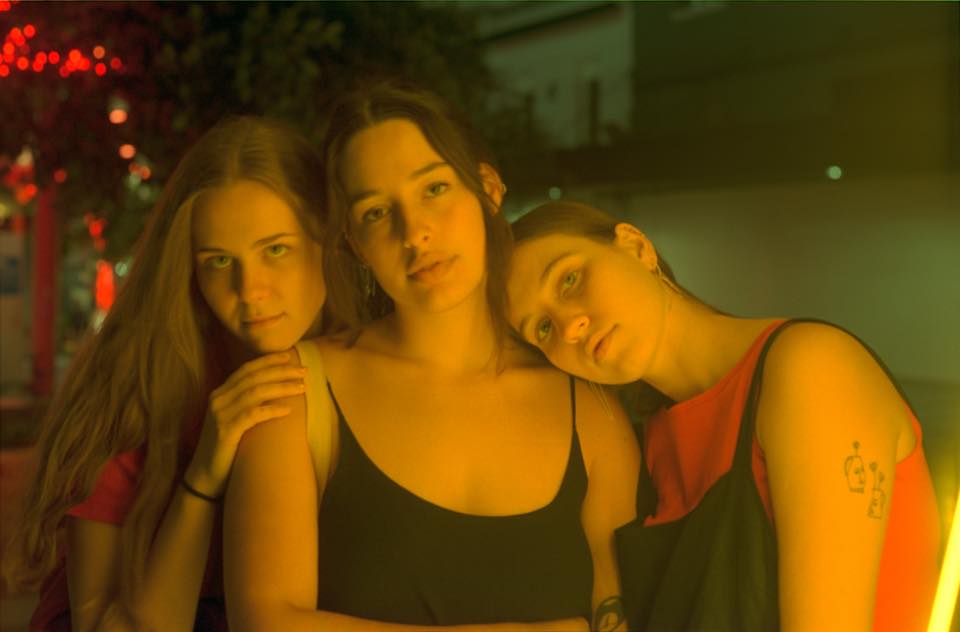 
This Sunday March 25th, CONTROL teams up with Mermaid Music to present ‘Melodram Patheticus‘, an afternoon of local live music at Black Bear Lodge, Brisbane. Ahead of the event, we got two of the bands from the line up, Sleepclub and Start Together together for an Artist V Artist chat.

Start Together: Hi Sleepclub. How are all of you feeling?
Sleepclub: We feel… good?
We feel…..ready…

Start Together:  You all have many musical projects outside of Sleepclub – Amber with Cloud Tangle, Monica with Sweater Curse and Vanessa with Keeskea – what’s different about this group compared to all the other stuff you get up to?
Sleepclub: A- Personally I love that we all come from different band backgrounds and when we come together it forms something unique. I find it really easy and fun writing with sleepclub
M – I also love that we all come from different musical places. I have learnt so much from Amber and Vanessa through writing with sleepclub and it makes all my shoegaze/dream pop dreams come true.
V – our seperate projects seep into sleepclub a little bit (naturally so) and that’s what makes it a really interesting writing process because it’s a lil bit of EVERYTHING.

Start Together:   All 3 of you are multi-instrumentalists and can sing like demons – do you identify with any particular instrument over another, and what motivates you to become so proficient at more than one thing?
Sleepclub: A- I want to play everything!! I think every instrument is useful and valuable and the more you can utilise in writing and recording the more options you have with your sound.
M – I am most comfortable with keys but I also want to get better at playing guitar! I wouldn’t describe myself as proficient in any of the instruments I play but I try my best and I get a lotta help from my beautiful band mates. Living to learn babie
V – I definitely only really identify with guitar. But playing drums unconventionally has been super exciting (although mostly TERRIFYING). I like it though. Bossanova rhythms are all I wanna be.

Start Together: Our band usually keeps the rehearsal space happy and motivated through the use of snacks (especially hummus and cheese); does Sleepclub have any snacky requirements to maintain productive levels of musicality?
Sleepclub: We love mochas and also chippies from Carraway Pier. Also packet chippies.
Any kind of chippy is be good for us. Also the occasional bread and feta and tomatoes and olives are a good option. We just love to eat okay?? …… Monica is Italian and so we are only allowed to eat good food and lots of it. No white sauces for Amber though.

Start Together: What music are you really into at the moment?
Sleepclub: A- I’ve been binging on minimalistic piano artists and also FRITZ, The National and Deafcult’s album Auras.
M – I have been listening to a heap of FRITZ as well, Frankie Cosmos, Mr Jukes and Kllo (sorry Vanessa)
V – …. I listen to too much, it’s a mess. Most of my library is Little Dragon atm, but I did recently discover a Dutch artist called Luwten and she is amazing (it’s ok Mon).

Start Together: 1 out of 3 people have mild to severe insomnia – who is it in Sleepclub?
Sleepclub: A- sleeping is for when you’re dead.. I would have to nominate all of us for lack of sleep though.
M – I have to agree with Amber – we are all really bad at having proper sleeping patterns.
V – sleepclub is simply a name that outlines what we wish we had but don’t. Sleep, a club, and I guess that’s all really.

Start Together: The winter Olympics were on recently – did you care?
Sleepclub: A- I really enjoyed watching women’s snowboarding and also the ice skating. But other than that, I couldn’t really care.
M- I really wanted to watch it but actually missed everything. I didn’t see a single act but ice skating would have been so cool.
V – I missed everything but Mon and I went iceskating recently and I think that’s pretty proactive?

Start Together: Our bass player Emma keeps killing all of her house plants – any advice? Asking for a friend…
Sleepclub: A- I guess working in an indoor plant shop means I have to answer this one?? In all seriousness though pls don’t kill the plants just play them some nice music and they will be ok.
M – My housemate is really good at keeping plants alive and we bought a hanging plant together and it died in a week so I am no help here.
V – Classical music apparrntly accelerates plant growth. So chuck on some Bach and see what happens!

Start Together: Outline your perfect gig in 5 words or less.
Sleepclub: A- Interpol comes to Brisbane
M – Someone else carries our gear
V – someone carries me and the gear

Sleepclub: Firstly on a serious note, how many songs do you have where you all … start together?
Start Together: We’re not sure on this one, some of us thought it were two songs, and others thought it was just one. Our band’s namesake is very uncharacteristic of our actual arrangements. Also we have no idea…

Sleepclub: If Start Together has to play as a cover band for a living, what artist would you each want to cover?
Start Together: Emma – Warpaint.
Ged – I’ve been teaching myself a few Curtis Mayfield songs recently. I could see myself making the rest of the group do those with me, for sure.
Demetry – King Krule. But I’d want to play drums instead.
James – Queens of the Stone Age (I love pretty much everything they’ve even written)

Sleepclub: Word on the street is that since the release of your single, there is an album or two ready to go. Since it’s been less than a year since your first show, where do you get the time for that kind of accomplishment?
Start Together: Yeah, there was pretty much two albums worth of material at one point! Initially we were all very excited about getting our hands dirty by completing and recording all this stuff ASAP, but life got in the way, as is its wont. We love Start Together, but we are very busy people with a lot going on outside the band, so the plans to put everything on the shelf and complete and record 20+ songs slowly got away from us; it was completely unreasonable!! The negative side of all the exciting creativity is that when you couple the desire to maintain and complete that kind of output alongside the jobs of figuring out how to get a new group working and evolving, scheduling 4 other people to be in a room, organising gigs and all that other band shit, things tend to get into a state of flux, and you have to shift your expectations or this stuff can just kill you. We’re doing a steady release of a few singles over the next 12months while we demo up a debut; it’ll all come to light slowly. Not sure where all the time writing came from, best not to over-think these things!

Sleepclub: What’s everyone’s guilty music pleasure?
Start Together: E – Cheesy 70’s disco
G – Rammstien
D – Music shouldn’t make you feel guilty, but I like to dance to Take on Me, by A-Ha.
J – I’m not sure why, but I think of Good Charlotte when someone asks me about my guilty music pleasure. I don’t put their records on or anything like that, but if I hear them on the radio I totes feel a little “FUCK YEA” go on somewhere deep inside me.

Sleepclub: Someone from ST has to jump off the stage during your set and crowd surf. Who do you nominate and why?
Start Together: E – Demetry – he looks light and nimble
G -Demetry; he’s the lightest member in the group, so would cause the least harm and would likely most enjoy the experience.
D – Sure! Chuck me in there.
J – I will fight Demetry for the right. Or better yet I’ll fight him while we’re both crowd surfing! 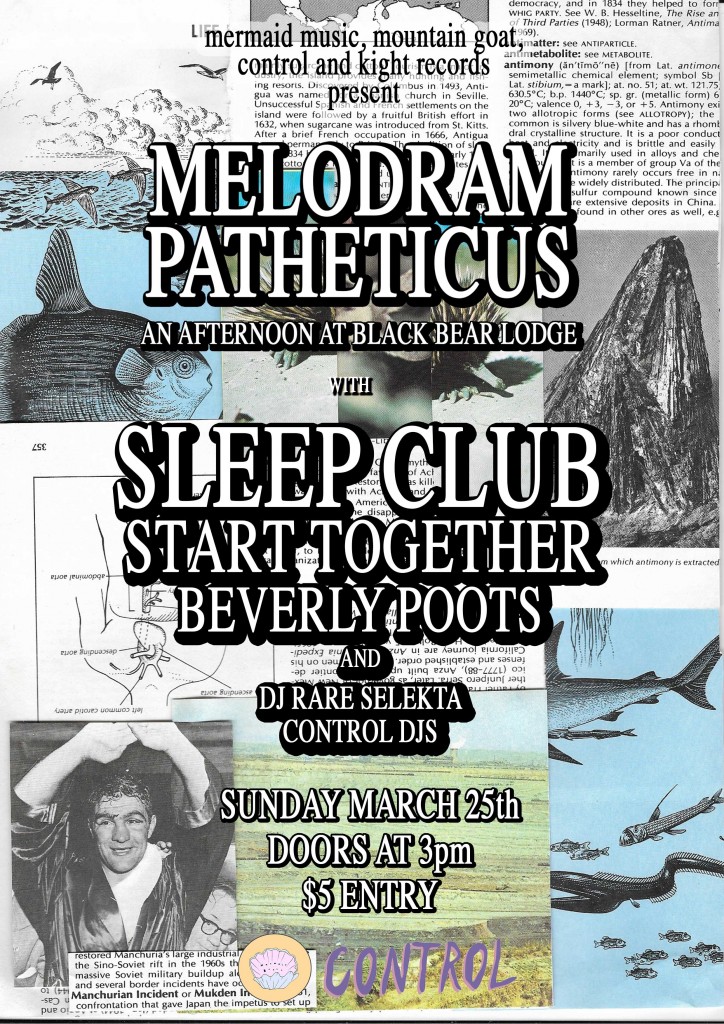