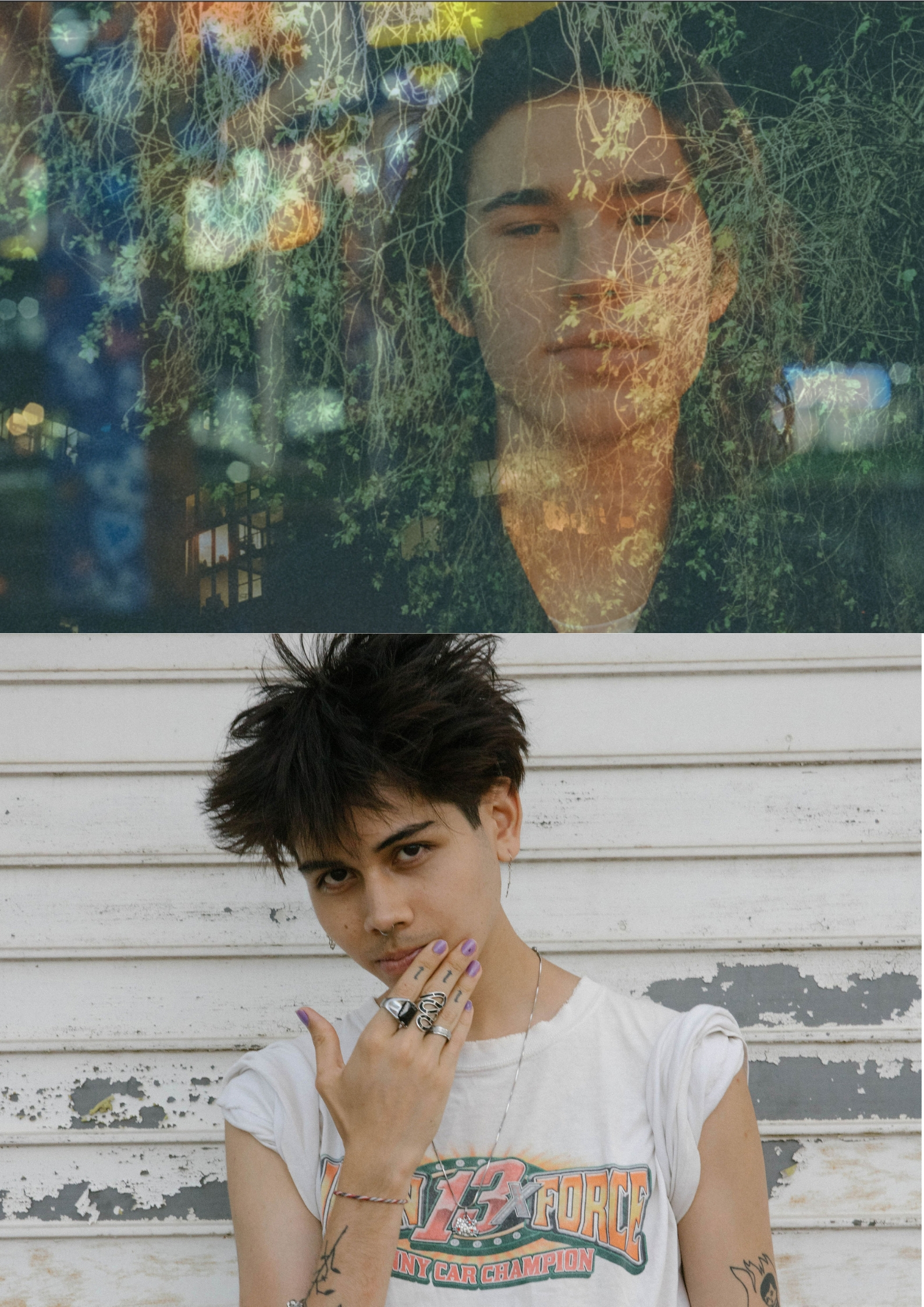 Ahead of their performances at The Foundry and CONTROL’s Labour Day Eve Party in Brisbane this Sunday, we got the event’s headliners, Brisbane-via-Sunshine coast artist Chakra Efendi and Newcastle’s e4444e together for an Artist v Artist chat.

Chakra Efendi: Hey hey Romy, I’m excited to be getting the chance to meet and perform with you. As a fan of yours and numerology I have always been quite curious as to the origin of your moniker, could you please shed some light on this for me?

e4444e: Hmm, I’ve had the name e4444e for my solo music for so long, maybe since I was like 14? I’m not really heavy into numerology or anything but 4 is definitely my favourite number and has been forever, I tend to do things in multiples of 4. As to the origin or meaning of the name I can’t really help you there hehe. It’s not the hex colour code.

Chakra Efendi: As a fellow bedroom producer I’m in awe at the soundscapes that you create, especially with such a prolific catalogue under your belt, you seem to have your own unique way of immersing the listener into your own world of sound, could you run me through the process of an e4444e recording session?
e4444e: I’m always kinda messing around with things in my room. Most of the stuff I make I think is pretty bad honestly. But little recordings and textures get fed into songs I’m down for over time. There are big sessions that last all day recording and sometimes days where I only spend like 15 minutes doing music stuff. Usually if I know I can spend the day doing music I’ll wake up and read for a bit, drink coffee and listen to music, then just start to go at it. Lately it’s been a lot of guitar and drum machine and samples, those are my three favourites right now. A lot of things are being sent thru a lot of other things. A lot of duplication. A lot of time spent on rhythms too. Don’t wanna say too much and ruin the magick. distortion->lowpassfilter+phaser+delay=highwaymusic

Chakra Efendi: Newcastle and Brisbane seem to have a very tight knit relationship, oftentimes the local music scene tends to define the sound of artists within their area, although you seem to have a very unique sound. As a Newcastle local yourself how do you feel that the environment around you influences the way you make music?
e4444e: The natural environment is definitely a big thing. A lot of songs I can remember being written after going out for a while by myself. Walking around my house and the beach, the bush. That was a big thing for that Mr Dover album. This new EP is more about the walks home from the pub, the artificial streetlight on the kinda dehydrated looking trees. Something kinda sombre about that.
I guess I don’t draw too much inspiration from local bands because I just feel like I’m on my own sorta thing. I’m more interested in making something that I wanna listen to at home or outside or something I haven’t heard before you know? It’s not like I wanna make something that makes people wanna go out and get really hyped up and sing along which I feel like is a lot of the music scene I see in Newcastle and Australia in general. Not that there’s anything wrong with doing that, and I love to do that myself. But I don’t even think I’d be good at making music that makes you wanna do that if I even tried anyway haha.

Chakra Efendi: You’re heading on tour in May for your latest single ‘Streetlight(hide)’ what are some negatives and positives of being a solo musician/performer whilst touring?
e4444e: It’s pretty cool for the most part, I love bringing my friends and going skating or going out after the gig to random places. Me and my friends are the types that like to venture out into Australia. I guess being solo sometimes you go by yourself and it can get pretty boring waiting around after sound check, being on the train by yourself for hours. “Hope you got a good book!”.

Chakra Efendi: The art you make is just as beautiful as the music you produce and aesthetically compliment each other respectively, how important is it for you to have control in the way you present this media, and can maintaining a visual/audio representation be difficult when achieving a certain artistic vision?
e4444e: Hey thank you that’s really nice to hear. If it’s not made by me the art is usually made by David Lobb, the secret second member of e4 hehe. The way I see it is if it has visuals then you gotta make them good and its gotta make the song better? I was pretty psyched on the streetlight cover having that poem by my friend Ivan Gorgievski (secret third member). And that’s the whole thing with visuals innit? Like they are this other dimension, another mirror to bounce off of. I was psyched with the idea of having this emotionally rich poem that has this weird symbiotic relationship to the song coming out with it, the writing and the song feeding off of each other to make this greater thing.

e4444e: Watsup man how are u? Keen to play with u too, that EP is super cool. I read in your Bandcamp bio you said your music is haunted. I feel like sometimes my music comes from weird places n carries weird things in it. Is this just a cool tagline or is there something behind saying that?
Chakra Efendi: I coined that one sometime ago. A lot of my music is written from a dark place or holds memories to me, I feel like my songs can sometimes be considered the ghosts of my past. Also, it just sounds sp00ky so I ran with it.

e4444e: I love java. Describe – if any – the links between your music making and the mud (coffee)?
Chakra Efendi: There isn’t too much of a link between my music and coffee. I used to have a really bad caffeine addiction but weaned it down to one coffee in the morning. I work at a cafe so that’s nice, I hate to admit it but I’ve definitely turned into one of those ‘don’t talk to me until I’ve had my morning coffee’ people. I get one every morning, ride my bike, sit in the park, listen to the birds, and enjoy being present.

e4444e: You wrote most of this EP’s songs in high school, what were you listening to throughout then? Can you list your favourite band for every year of high school?
Chakra Efendi: I find that I hold nostalgic memories to certain albums and artists that I listened to in high school, and often categorise my life by what I was listening to at a particular time.
Year 8 was Daft Punk, A-Trak, Ta-ku, Crystal Castles.
Year 9: Earl Sweatshirt, Wu-Tang Clan, MF Doom & Madlib (Madvillian), J Dilla, Nujabes, Shlohmo.
Year 10: Flying Lotus, Samiyam, Girls, King Khan and The BBQ Show, Black Lips, King Krule, Mac DeMarco.
Year 11: King Krule, Homeshake, Earl Sweatshirt. DIIV, David Bowie
Year 12: Alex G, Daniel Johnston, The Microphones, Melody’s Echo Chamber, Trust Punks, Ariel Pink, Arthur Shea and a billion other Soundcloud artists.
I know I’m missing heaps but damn this was nice to reminisce.

e4444e: I really like the way your vocals kinda soar over everything on these songs. Do you have any special ways of coming up with songs? Do you sit down to write or play music or just kinda float thru it?
Chakra Efendi: I often write poetry, and then write songs on my acoustic. Sometimes I have a vocal melody idea when writing the chords, but often times I’ll just re-write the poetry to fit as lyrics.

e4444e: What are those sounds on the “Home” track? How important is the sound of each instrument to u? And where do you get textural inspiration from?
Chakra Efendi: Those background sounds are some birds from my hinterland hometown of Nambour and me smoking a cigarette put through a heap of filter delay haha. I wanted it to reflect the environment I was making it in, I feel that it’s important to have the soundscape of a song reflect the environment it was created in, or one that compliments the nature of the song. All the other sounds were created with some old Yamaha synths, an SM57, and a microphone that my drummer Fin Wegener crafted from a landline telephone. So… l o ~ f i.

Sunday 5th May |  The Foundry Brisbane 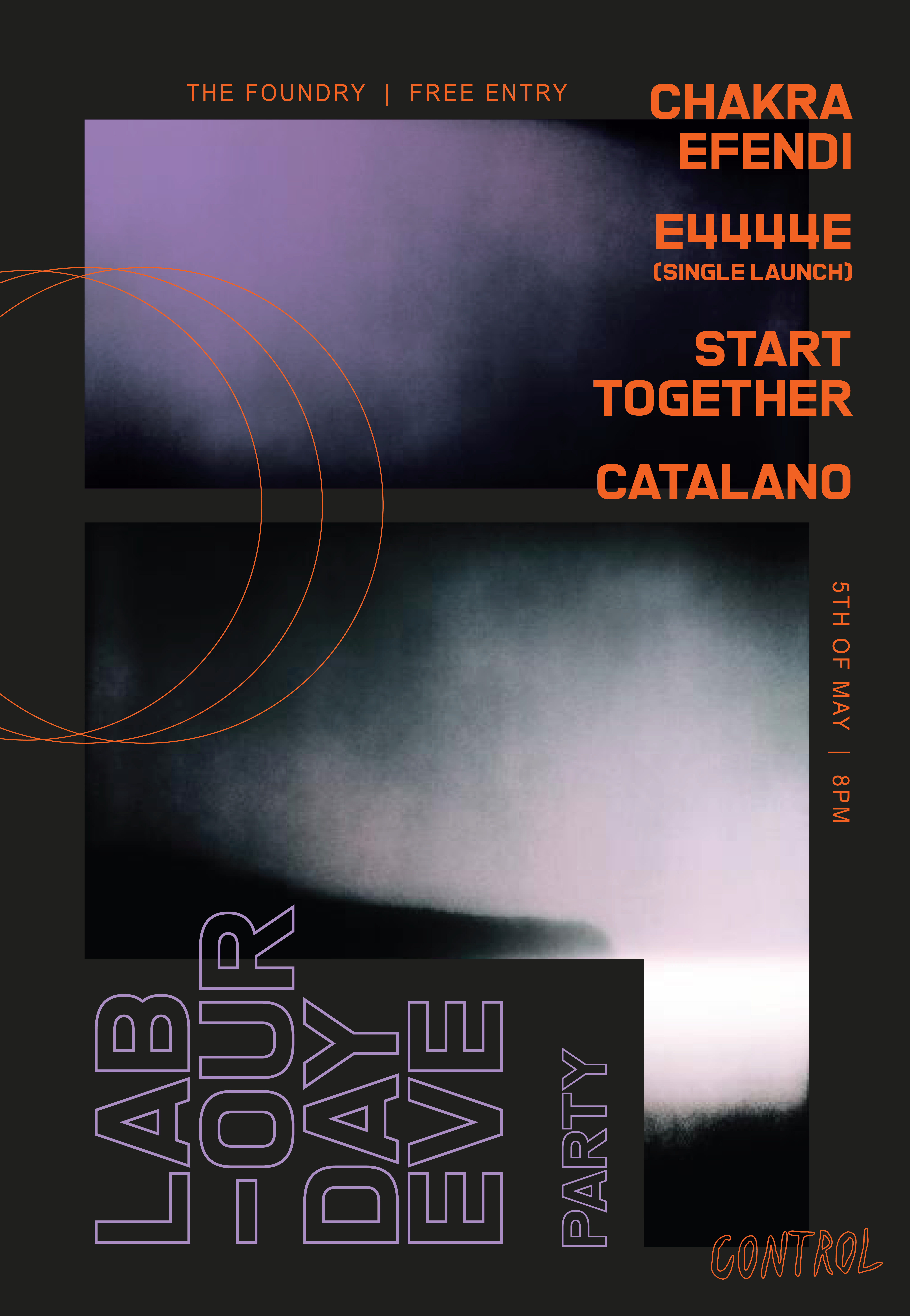