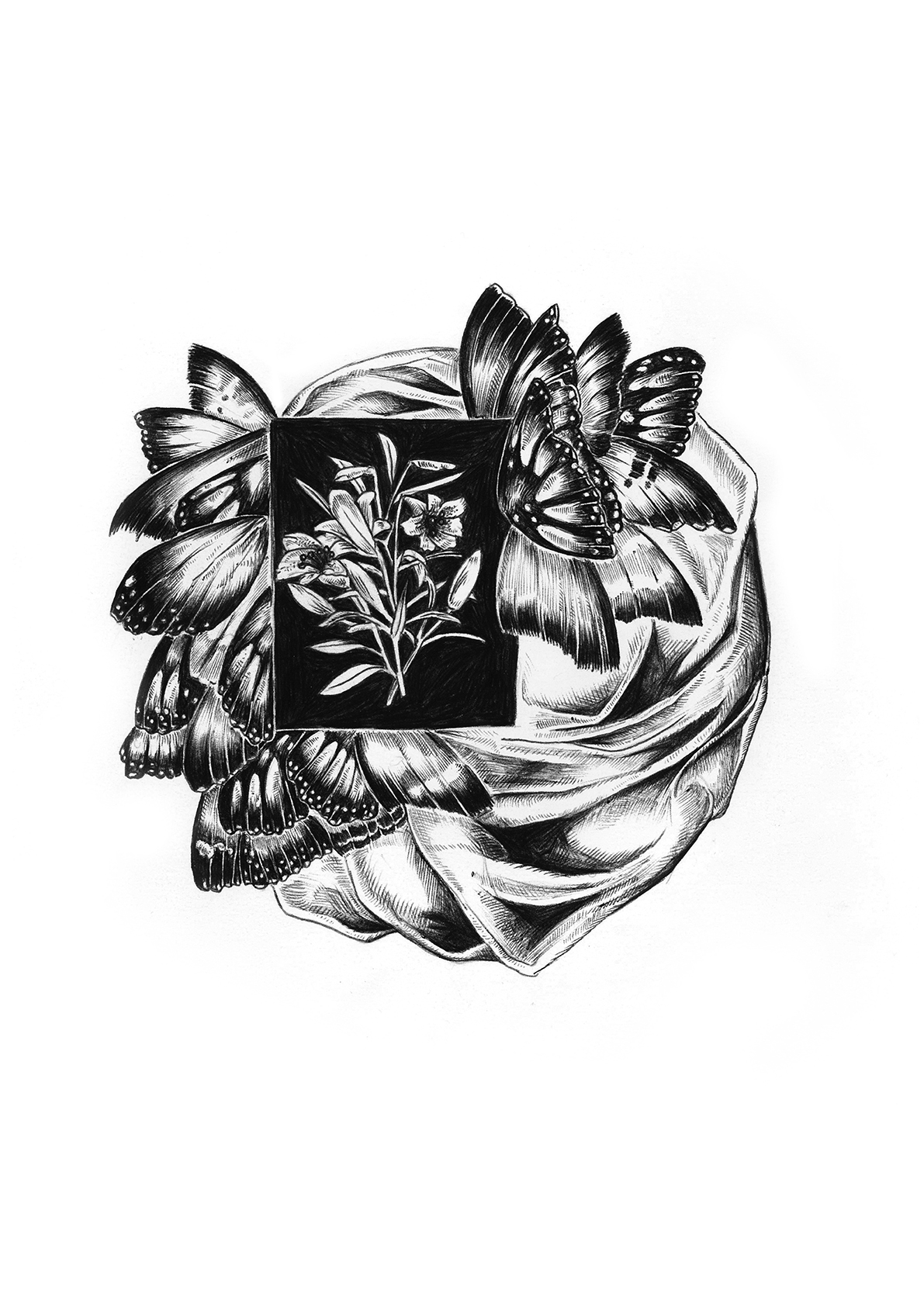 Were you drawn to the track ‘Self Love’ off the EP or did Twin Haus ask you specifically to produce a piece for the song?
Dan asked us all (myself and the other artists) to choose a song ourselves that we connected to and wanted to interpret for the band. ‘Self Love’ was definitely the track that I was really wanted to do because I was drawn to the title and how I felt after listening to it.

What does self love mean to you?
I feel like self love is something that should be incredibly important to all of us although it can be a struggle at times. It can involve a range of different things, from acknowledging that we’ve achieved something to be proud of or by being gentle with ourselves during hard times. For me it’s been a bit of a struggle over the years when it’s been impacted by mental health but it’s something we all have to continue working on.

You didn’t have any lyrics to work with so your interpretation of the song was kind of without influence in that way – what meaning did you draw from the track?
I felt like the track had a rising feeling of tension and uncertainty building under its constant pace as the song progressed that really resonated with me. I interpreted this as some of the conflicting emotions that can surface while change progresses within us. Sometimes self love can be a journey that we have to keep working towards and i felt like the track was really working in that direction.

How did you go about translating your interpretation of the song – did it come as a fully formed idea or in stages?
It definitely came in stages and changed a few times from when I first listened to the track. I started off by writing down everything that was coming to mind as I was listening to the song and how it was making me feel and then explored some of those ideas by doing up a few different designs. I had an idea of what I wanted to do for the piece in the beginning and used it as a guide to work around.

Can you talk us through the symbolism of the different imagery in the piece?
I’m naturally fascinated with living forms, particularly insects. For me, I see moths and butterflies as symbols of growth and I’m interested by the different ways they change during their lifecycle. Self love can be a bit of a struggle for a lot of us and it’s usually quite tempting to stay wrapped up where we are and with what we’re already comfortable with instead of branching out and allowing ourselves the space we need for growth. The protective walls we put up around ourselves can be a source of comfort and security as well as something that ties us up and holds us down.

How did you find the process of creating a piece when presented with a theme, rather than something you were inspired to make on your own?
I found the challenge of working within a theme to be pretty exciting because it helped me develop and explore new concepts that I otherwise might not have considered before. In this case there was still a lot of freedom to work around with ideas and images because it was still quite broad and I felt really connected to the concept.

Your work is incredibly detailed and intricate – can you tell us a bit about how your work comes together?
I’m a big perfectionist and critic with my own work so there’ll be a lot of times when I’ll redo a drawing if I’m not 100% happy with it. This also means that I spend a lot of time drafting up different versions of sketches until they feel right before I make a start on anything. Once I do though, I find that sometimes I can either lose track of a few hours while I’m working on something because I go into a bit of an art trance while other nights I have to take things a little more slowly and be patient with myself as the drawing comes together. Ultimately, having something with a lot of detail to focus on is really calming for me and I tend not to think about things that are on my mind while I draw. I usually finish a piece feeling really tired and calm and it’s great.

You were commissioned by Twin Haus to produce artwork for their single ‘Blood Tapes’ and tour artwork, and the pairing of your work and their music is such a harmonious match. Are you drawn to projects where the other party reflects elements of your own work?
The opportunity of working with Twin Haus again has been something that’s really helped me develop skills and grow. I’ve always loved the challenge of working on any type of project and in this case I’ve been really fortunate to be working with a group who’s music I especially love and connect with.

Pre-orders of the prints are available here and will be dispatched upon the release of ’Nothing Lavish’ from Brisbane, Australia on March 22, 2016.

Nothing Lavish will be released on 22 March via Bedlam Records.

Twin Haus || Self-Love from Kids of Bill on Vimeo.