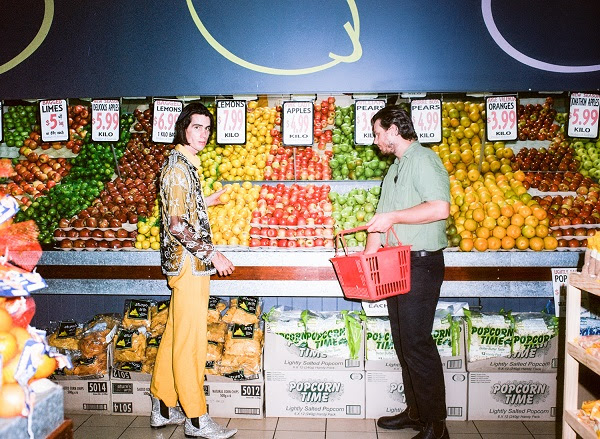 Experimental duo Tropical Strength are brothers “Al Foil” and “Sir Dinsington”, though you might recognise them as Al and Russ from Shining Bird, or Al from The Pinheads. Focusing their collective talents into new focal project, the pair combine sonic electronic layering and psych, and takes influence from Nursery Rhymes, Stephen King Novels, and the experience of growing up in a coastal hamlet.

To celebrate their latest single, plus a string of launch shows over the next couple of weeks (dates below), Tropical Strength created a guest playlist of their top “Niche Hits” – a 9 track sample of the kind of weird and wonderful sonic gems from across the internet that have inspired their sound. We thought we better kick things off with Tropical Strength’s new single, ‘Let’s Take A Walk’.

They’re Japanese, despite their French name. There’s next-to- nothing known about Les Raz. The original bass player was arrested for hijacking a Japan Airlines flight in 1970, and he and the lead singer, and possibly the rest of the band, were heavily involved in the Japanese Red Army, a radical left-wing communist militant group. He absconded Japan after the incident, and lives in North Korea now. Their earliest live performances were accompanied by avant-garde theatre productions. Possibly the nichest band of all time. I suggest listening to White Awakening first.

Dean Ford and The Gaylords – That Lonely Feelin’

One of the many lost gems of the hyper fertile sonic cesspool of the ‘60s.

The Californians – Can’t Get You Out of My Mind

This is kind of the same story as the song above. This song highlights the extreme production of music that was used specifically for AM radio waves during the ‘60s. As a result, it’s given the choral vocal harmonies a type of magic.

Trish Keenan is one of the founding members of Broadcast. Sadly, she’s no longer with us. I was lucky enough to catch her perform with Broadcast in Sydney in 2010. Listen to Trish’s Motorway Mix on Soundcloud, as well as Broadcast as a whole.

The Smoke – The Smoke

My friend, Luke Spook, showed me this album when I was deep in a baroque phase. Speaking of baroque, if you haven’t listened to Odessy and Oracle by The Zombies, I suggest you listen to it now.

Goblin is an Italian psychedelic band hailing from the 1970s. They wrote the score for Suspira, one of the spookiest and most beautiful films of all time.

John Carpenter is a film directer who produced the scores to his own films. His most well-known movies are The Thing and Halloween, but some of his lesser-known films have some really cool scores, similar to the Stranger Things theme. I’d suggest watching The Fog.

Everybody knows the Beach Boys, but not many people know the songs from their Christmas Album. Ditch
Michael Buble this year, and listen to Little Saint Nick.

You might be familiar with these guys, too for their song ‘For What It’s Worth’. It’s definitely worth listening to ‘Broken Arrow’, sung by Neil Young. The structure and movement of the song is unprecedented and unique.